Line for the russian cheeses (variant 1)

Tewes-Bis Sp. z o.o. > Our offer > Lines for the production of ripening cheeses > Line for the russian cheeses (variant 1) 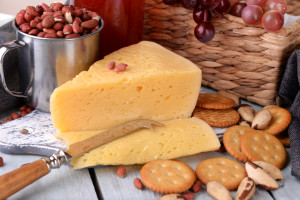 Automatic line for the production of ripening cheeses of the Tilsit and Russian type in the dry grain forming technology. After separation of the whey from the cheese slurry, dry grain is directed to the column forming device. Pre-pressed blocks of cheese after being placed in moulds are directed via the system of conveyors to individual compression in the final press. After the final pressing, the cheese is directed to the salt bath, and the moulds are returned to further use after cleaning. The production line can be equipped with an automatic system for dry grain salting.